One day, we find ourselves standing on a very interesting planet.  This planet is far, far from Earth, and orbits VERY close to a black hole.  As such, their perception of time and energy is very different from the rest of the universe. Being close to such a large mass, time on that planet actually runs much slower than it does on Earth.

To solve their world’s energy problem, the people on this planet launched a very special satellite in a highly-eccentric orbit.  This satellite comes very close to the planet during a small part of the year, and quickly slingshots far away for the rest of the year.  It is in its own stable orbit and requires no additional energy once launched.

When the satellite is close, they charge its internal capacitors with almost no losses.  The satellite receives over a megajoule of energy.

When the satellite is finally a long way from the planet, it begins beaming a tightly-focused microwave beam toward the planet at 10ghz.

Due to the nature of special relativity, these waves become refracted as they approach the planet.  This causes an upshift in the frequency many-fold.  The formerly 10ghz microwaves are refracted all the way to 500thz, where they are received on the planet as visible light.

Because this blue-shift refraction has increased the energy of the incoming waves, the planet is now able to use much more power than it transmitted to the satellite in the first place.

Naturally, the planet sets aside a small amount of power to recharge the satellite when it is back nearer to the black hole.

This process worked so well that the planet eventually launched dozens of these satellites, and they now provide all of the power and light they will ever need.

Some crazy inventors on that planet still are hard at work trying to recreate the same effects with simple circuits, since refractive shifts in frequency are much easier to create using coils and capacitors as opposed to the expensive, bulky satellites.  One of them was heard muttering that frequency is energy and another went insane rambling about kings and electrons…

Earthlings trying to reach them are not likely to ever make contact with this civilization.  You see, while that planet uses the exact same radio frequencies we use on Earth, the relativistic redshift means Earth receives them at 1-100hz.   And while the black-hole planet received every one of our SETI transmissions, they cannot decipher them as the radio waves get upshifted to gamma-ray bursts as they approach the planet. 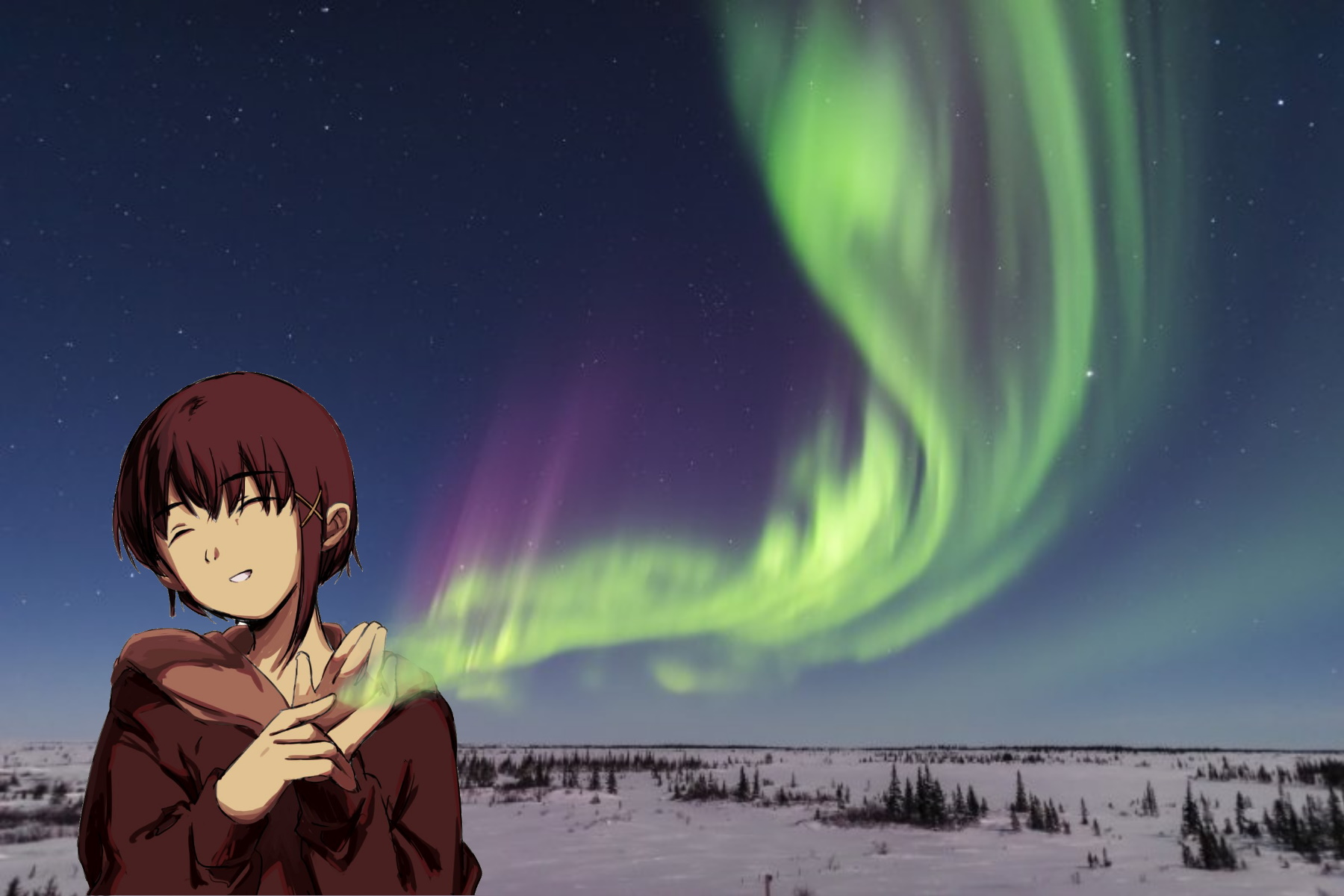 (Editor’s note: This is a semi-serious brain-dump, blending the metaphysical and cyberpunk elements of the transcendental anime Serial Experiments Lain with the practical science, science, and theory laid by the great 19th century Electrical Engineers like Nikola Tesla, Thomson, and Heaviside.)

Everything is waves and frequencies. The whole universe. What we see as solid matter is actually a complex collection of waves that interact with themselves in a way that looks like solid matter.

The two fields that form these waves (dielectricity and magnetism) both have different properties. There are different ways to exploit reality by taking advantage of the two different properties and how they relate to one-another. The most popular engineer to exploit this would be Nikola Tesla, who employed parametric variation to get effects that would otherwise be impossible using a normal circuit (efficient transmission of power through the ground, one-wire transmission, FTL propagation of information, energy synthesis, etc).

The ‘Schumann resonance’ is a propagation channel that electromagnetic waves can efficiently travel around the Earth. It is the resonant frequency of the Earth and in many ways its heartbeat. The Schumann cavity is bound by our ionosophere, which is affected by the Sun, so in many ways the Sun is part of the same ‘circuit’.

Because our brains are complex fractal antennae, ESP and psychic phenomena can be explained by simple ‘tuning’ between nearby minds.
Like any other radio transmission.

The signals we ascribe to human brainwaves (5-40hz) are in reality much faster, but we only see a stretched ELF signal due to the nature of refraction. The real signal is far more dense, but is ‘compressed in time’ beyond the Shannon limit.

While we cannot directly measure/interpret these signals, we can still amplify them directly by analog means. As long as the transmitted signal carries some level of harmonics with the original signal, much of the original information will be preserved inside the transmission.

Because the electrostatic force is an instantaneous force (an infinite-velocity scalar) high-voltage would be the best means of amplifying these latent signals. The best way to accomplish this is by a dynamic HV modulator like a Tesla Coil.

Take an EEG and feed the output to an analog filter+amplifier. With optical isolation, feed that signal into a Tesla Magnifying Transmitter. With a grounded Magnifying Transmitter, the ground is part of the circuit and your own thoughts can be amplified+transmitted along the Schumann resonance cavity. Thus we have a potential ESP amplifier:

Of course, we can do the same thing in the other direction, by directly amplifying ELF Schumann signals and feeding them directly to the body via low-power e-stim or by magnetic stimulation.

And thus, the Psyche processor goes from being a sci-fi concept to an engineerable series of experiments.

This of course leads to practical questions and problems along the way. How much power is needed? how much amplification? Will the system work digitally? What are the actual effects? How would our minds interpret such signals? Would it only affect our subconscious? These are all questions that would have to be explored.

As a more small-scale repeatable experiment, it may also be possible to not only record EEG signals, but to play them back as well. If the modulated brainwaves contain hidden content, then playing ones own brainwaves back to them (via e-stim) might cause the subject to play back a particular thought-process, energy, or emotional state. At the most complex level, it may allow a person to play back entire memories.

Where do we go from here? It all depends the direction the universe guides us.

In regards to determine the effective velocity of longitudinal transmission, I have not seen any quantative researches. Hence, I have looked to my local AM radio station for a reference. This station (KAZN) is located exactly 4.4359 miles from my test point, and broadcasts on a frequency of 1300 kc. Therefore in any attempt to receive the tower’s overground signal, no ionospheric propagation reflection delay will exist. As it is merely the groundwave which presents itself at these short distances.

This experiment is comprised of two different receivers: a Tesla transformer crystal radio setup, and a 1920’s single coil crystal set. The Tesla receiver is Earthed directly to a grounded network, whereas the other set employs an antenna and ground as well. A Rigol 1054z oscilloscope is used to analyze the phase shift of the waveforms.

In any circumstance, whether it be any local station, or different time of reception, the longitudinal wave broadcasted by the AM transmitter always leads the waveform of the overground signal. That is, the overground signal or transverse electromagnetic wave lags some degree, given it propagates at nearly the speed of light. Taking into consideration the distance this signal must traverse, and the velocity of light in air (186,228 mi/sec.), it takes approximately 0.0000238197 seconds for it to arrive at the receiving antenna. Hence, we can use this as a reference point in determining the velocity of the telluric wave.

The following are measurements taken using the KAZN station. Note that it is the audio which is analyzed, so that any receiver phase shifting is not interpreted. The delay time is relating to the advancement of the longitudinal signal.

G. Brock is an experimenter, mathematician, and engineer in the field of “true” electrical science. He investigates the works of major electrical pioneers of the 20th Century, and applies them to practical applications. He has produced multiple reproductions of Tesla’s wireless telluric communication systems, and is credited for forming a simplistic Electrodynamic Seismic Forecasting system. He continues to pursue the field of electrical engineering for the near future.